10 Castles of the Middle Ages in Catalonia 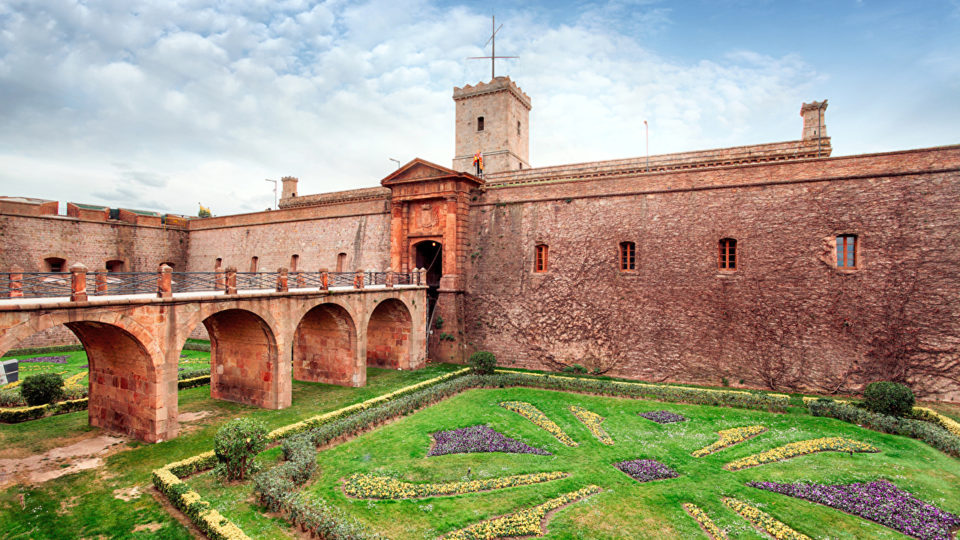 Its location and construction make them an ideal location for all types of audiovisual productions and photographic shootings with the best views of the territory or the best medieval backgrounds of the country. The RVD Media Group make it easier to choose … with a list of the 10 most impressive castles in Catalonia.

In Catalonia there are about six hundred castles and fortresses scattered throughout the territory. These castles are located in different points of the Catalan geography in the four provinces – Girona, Barcelona, Lleida and Tarragona. Most of them are from the same period, the Middle Ages, and are the best sign of the historical past of Catalonia. The castles played a defensive role and were located in the highest and best protected parts.

Do you want to find the best medieval location? Get in contact with us!

The Castle of Peralada, as its name indicates, is in the region of Alt Empordà, it was the residence and center of the county of Peralada and stands out for its elegance. Usually, the castles, by their majesty, allowed to demonstrate to the town the power that the count had.

It was built in 1285, in the center of the village, but during the war against France it was destroyed and rebuilt outside the walls. In one part of the castle the Casino of Peralada is located and in the gardens annually the well-known Peralada International Music Festival is celebrated. In it have been presented diverse operas with artists of world fame like Paco de Lucía, Plácido Domingo, Sara Baras, Joaquín Cortés, Mikhail Barivshnikov, Norah Jones, Miguel Bosé, among others.

It houses also several museums, about wine and glass and ceramics, as well as a wine cellar that bears its name. Also inside the enclosure we find a library, a church and a Romanesque cloister. 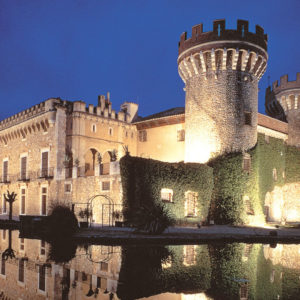 Located in the same region, the Alt Empordà, we find the castle of Sant Ferran. This castle, located in Figueres, is considered as one of the largest fortresses in Europe and declared the largest monument in Catalonia. It occupies 32 hectares and is located on the top of a mountain at the end of the ascent to the castle.

It was built for the protection of the territory after the Treaty of the Pyrenees, which stood for a alteration of the French and Catalan borders. Since then, the Castle of Sant Ferran has been an important space that has lived different and varied events. This fortress of the eighteenth century had a capacity for 6,000 men destined to stop invasions.

It is also possible to rent some of its spaces for celebrations, events and audiovisual projects. 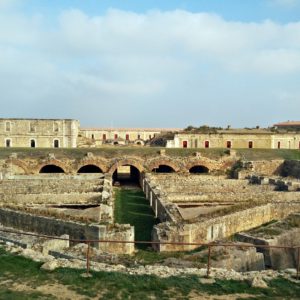 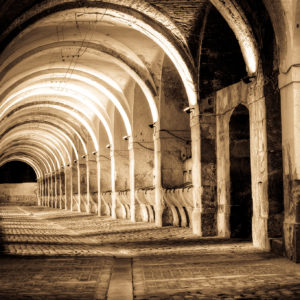 The Castle of Montesquiu is located in the municipality of Montesquiu in the Osona region, to the left of the River Ter. Everything indicates that this castle was a small guard- or watchtower, which is a tower built in an elevated place to fulfill the functions of surveillance. The lords of Besora lived there when they visited the región to control their lands.

The interesting thing about this building, besides the construction itself, is the environment where it is located. The castle is surrounded by an area of 546 hectares that make up the natural space of the Castle Park of Montesquiu, owned by the Diputació de Barcelona.

On the first floor of the building, the castle’s main floor is now preserved and on the upper floor there are several multipurpose rooms and lofts. Furthermore there are the resource center, the library, laboratories and the offices of the park. 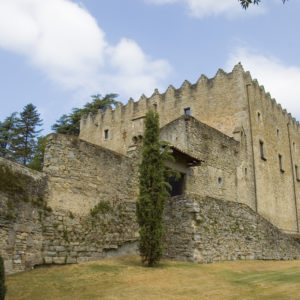 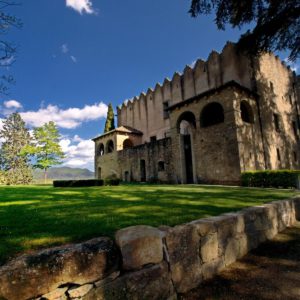 In the region of Bages, in the municipality of Cardona, we find the most important medieval fortress in Catalonia. The castle of Cardona is located at the top of a mountain from which the Cardener valley is controlled and observed. This situation was essential for the defense of the exploitation of the salt flats there.

From the 11th until the 15th century, the lords of Cardona, members of one of the most important Catalan families, lived here. The oldest remains of the castle are the Tower of the Minyona which was the tower of the fortress.

The castle of Cardona hides other jewels such as the church of Sant Vicenç, considered as one of the most important monuments of Catalan Romanesque. In this space were recorded some scenes of the film “Bells at midnight” of the director Orson Welles.

In this castle you will find luxury and perfection with medieval airs for your next audiovisual project in Catalonia. 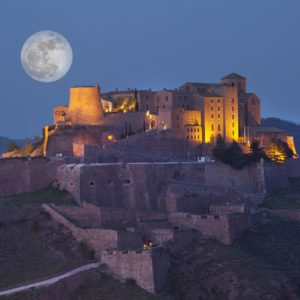 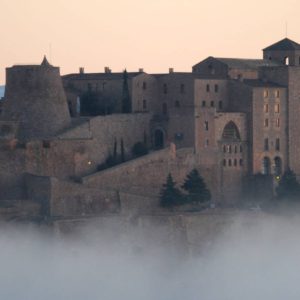 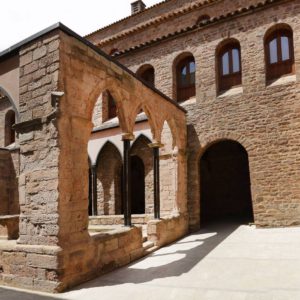 Another of the castles that identify Catalonia is the castle of Montsonís, in the region of La Noguera. During the Middle Ages the Count of Urgell, with the purpose to protect the lands he had just conquered the Muslims, built in the high part of the town of Montsonís this castle. The site of this castle marked, along with others, the border between Catalunya Vella and Nova Catalunya.

Its location allowed many pilgrims on their way to Santiago, to request accommodation in this fort. This castle is still inhabited today. However, a part of the castle is visitable and also hosts the Foundation of the cultural castles of Catalonia. 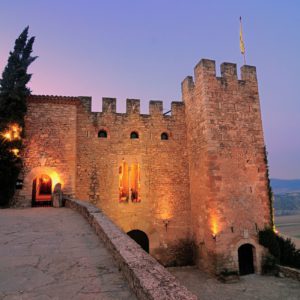 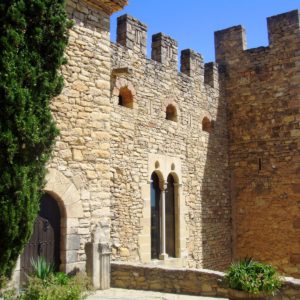 The Escornalbou Castle occupies part of the village of Riudecanyes in the region of Baix Camp, from where you can enjoy fantastic views of the regions of Tarragona. Choose this location for your next audiovisual production or photographic shooting if you are looking for an unparalleled landscape and a well preserved building with little public influx.

The name comes from the Latin “Cornu bovis” which means the horn of the ox. As for the spaces that stand out from the construction, these are the Romanesque church, the remains of the Chapter Hall and the cloister. 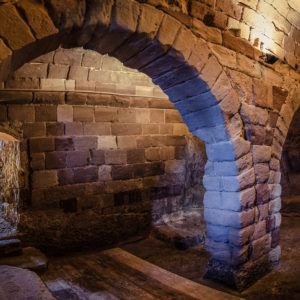 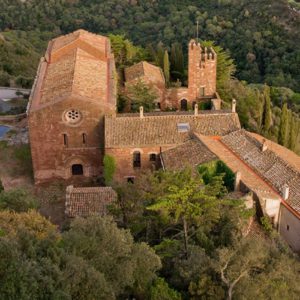 The Castle of Miravet is located in the Ebro Lands and rises on a hill near the river Ebro, at a height of 100 meters. It is considered to be one of the best examples of the architecture of the Order of the Templars of all Europe. And in its time it was the most important Templar fortress of the crown of Aragon.

Originally it was built by the Muslims in order to protect the territory of Al-Andalus. Its structure is divided into two distinct enclosures, and there are spaces such as the Treasure Tower, the Tower of the Blood, the courtyard of arms or the Romanesque Temple, among others. 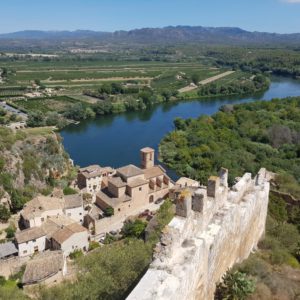 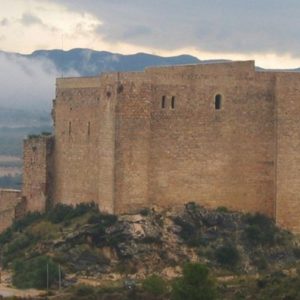 Actually this castle is not a castle, since the building as such was destroyed. However, the fortified medieval buildings that surround it, the only ones of the Catalan coast that are still standing, are preserved. It is a national historical and artistic monument since 1931.

The walled perimeter was built in the 12th and 14th centuries to defend Tossa from pirate attacks. The towers of defense are still standing, as well as much of the village. Its location, close to the sea, offers spectacular views from the beach towards the castle, but also from its towers towards the beach.

It is one of the locations that could well have been chosen by the famous series “Game of Thrones”, but you can also use it for your next audiovisual project. 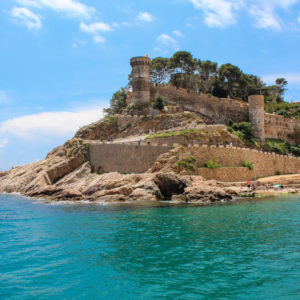 This ancient fortress of Barcelona has had different uses throughout history. It is a symbol of the different struggles that the city has experienced, and a privileged enclave of defense from which the whole city can be seen.

From there, Barcelona was bombed on numerous occasions and it was the place of the execution of Lluís Companys, President of the Generalitat. It has been used as jail, as a weapons museum … It is currently open to the public and is one of the wonders of the magic mountain of Montjuic. 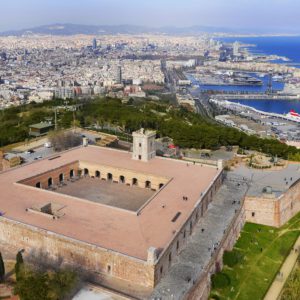 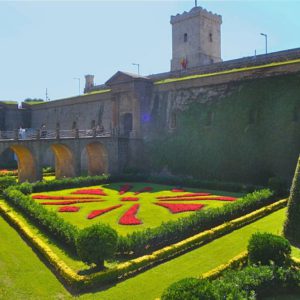 This castle is nestled in the beautiful Sierra de Guardia in the municipality of La Pobla de Claramunt, in the region of the Anoia, and is another sign of the clashes between the County of Barcelona and Al-Andalus.

On several occasions it has been demolished and rebuilt. At the moment the walls are conserved and it presents the structure of the castles of the 12th century.

With these locations of castles spread all over Catalonia you will get a great variety of frames for your next audiovisual production or photographic shooting. From high mountain to the beach, lakes and forests. It is up to you now!

If you want support to find the location that your next projects need, do not hesitate to contact us. Tell us your needs and we will take care of everything. We leave you a link to our portfolio and services so you can think about your next production.